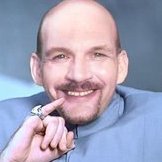 By Zactoman
November 7 in Vendors Board